Over the years people haven’t always been kind to Slough, Berkshire. In spite of the fact that the town has the second most productive economy in the UK, is the setting for one of the most successful British comedy series of recent years, and is a major transport hub, all too-often people judge the book by the cover and underestimate Slough… Montem Mound, in the Salt Hill area of Slough, is a prime example of how a fascinating story can be hidden beneath an underwhelming exterior – recent work carried out by the Round Mounds Project has shown that Montem Mound is far older than most had imagined, and is in fact part of the story of the earliest development of the social and political structures still in place in England to this day.

“Perhaps to this list of … landmarks in the early development of the political structures of England, we can now add Montem Mound, in Slough…”

Until now, the origins of the site, which is protected by law as a Scheduled Monument, were shrouded in mystery, obscured perhaps by an intriguing later tradition. Between the 16th and mid-19th centuries the mound, now surrounded on all sides by busy roads and the Slough Ice Arena, was the focus of a unique ceremony associated with the nearby Eton College. The ceremony consisted of a procession of Eton scholars in fancy dress or military uniform to the mound. The schoolboys then extracted money (known as “salt”, sometimes received in exchange for actual salt) from passers-by. Eventually the Eton Montem became extremely popular and attracted large crowds, including Royal patrons such as King George III and Queen Charlotte, to observe the procession and partake in the revelry.

King George III and Queen Charlotte at the “Montem”, 1778 (ink wash on paper), by  Samuel H. Grimm via the British Library online gallery

Montem Mound was examined by the Round Mounds Project during the 2016 field season. Two core samples were extracted from the mound in order to examine the makeup of the monument, and to extract material suitable for radiocarbon dating. The mound was found to consist of a 3.5m high artificial heap of sand and gravel. Charred plant remains extracted from near the buried former ground surface and from midway in the mound makeup indicate that the mound was constructed some time after the mid-5th century, probably in the 6th or 7th century AD. This places the origin of Montem mound firmly in the early part of the Anglo-Saxon period

Although its discovery is a surprise, the newly-discovered Anglo-Saxon monument at Montem Mound, Salt Hill, is not entirely without parallels – in the old churchyard at Taplow, just 3½ miles (5.7km) northwest from Montem is another very similar monument, also known to date to the early Anglo-Saxon period. Given their similarity in form, date and landscape situation, it is likely that, like Taplow, Montem Mound started out as the burial mound of an important local figure. 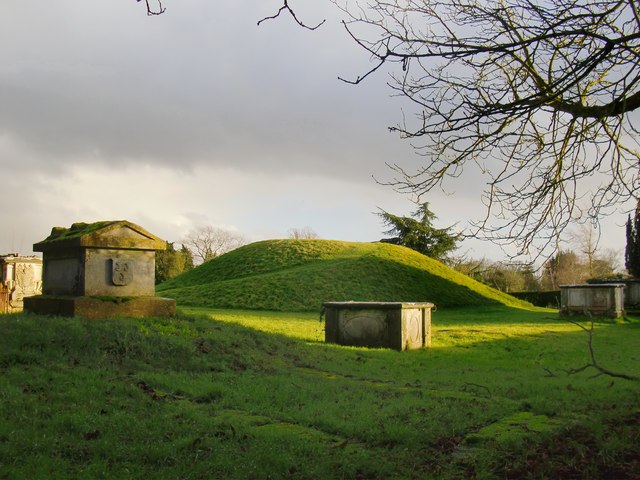 Taeppa’s Mound (which, incidentally, gives Taplow it’s name), was excavated in 1883 by a local collector of antiquities, James Rutland. The contents of the barrow, now kept at the British Museum and shown in the sketch below, were for a long time the richest collection of Anglo-Saxon grave goods found anywhere in the country. Up until the incredible discoveries at Sutton Hoo in 1939, the Taplow burial was the only real-life example of the fabulous wealth described in Beowulf (see below). Now, almost a century later, we know of a few more of these so-called “Princely Burials”. These burial mounds, the resting places of high-status individuals and local leaders dating to the 6th and 7th centuries AD, give us a fascinating glimpse into the traditions of a society in the midst of major political and cultural change: after the decline of Roman Britain, on the cusp of the re-adoption of Christianity and the development of new political structures which would, in time, lead to the formation of powerful kingdoms, and, ultimately, the emergence of a unified England. Perhaps to this list of important monuments, landmarks in the early development of the political structures of England, we can now add Montem Mound, in Slough…

Reproduction of sketch of the 1883 Taplow burial.

then wrought the Wederas’ people

a barrow on the hill, it was high and broad,

and they constructed in ten days

the war-chief’s beacon, the leavings of the fire,

with a wall they encircled, as it most worthily

the very wisest men could devise;

they placed in the barrow rings and brooches,

all such trappings, as before from the hoard

hostile men had taken away;

the treasure of heroes they let the earth hold